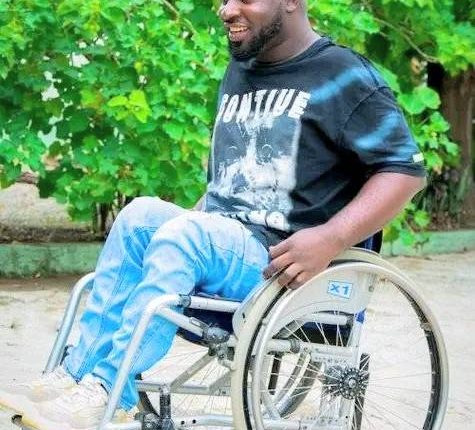 A polio survivor, Greg Simon, who just graduated from Lead City University against all odds, shares his story with TEMITOPE ADETUNJI

Tell us a bit about yourself.

My name is Greg Simon. I am a native of Kaduna State. I was born in 1991. I am a polio survivor, a disability advocate, an upcoming content creator, a volunteer and humanitarian. I just bagged a bachelor’s degree in Performing Art at the Lead City University, Ibadan.

Were you born physically-challenged or something happened along the line?

I was not born disabled. At the age of five, I fell sick and was taken to the hospital. I was given an injection, hoping that after some hours, I would get better but unfortunately things took a worse turn. I realised that I could not move my legs and hands anymore; I couldn’t do anything with my body. So, my mum started taking me from one place another seeking help. Along the line, my family was told that I had polio. I could no longer do things I used to do; I became confined to the wheelchair.

What kind of places did your mum take you to seek solution?

She visited even an herbalist, but that never worked. I was taken to the National Orthopaedic Hospital in Dala, Kano State, where I got lots of physiotherapy. It was through the physiotherapy that I was able to sit on my own, turn my neck, move my body. Hospital papers that I laid my hands on when I became an adult showed that I spent more than a year at the Dala Orthopaedic Hospital. Glory be to God, I am independent now, only that I can’t move my legs.

Did your father play any kind of role?

My dad died in 2013 but my problem started in 1995. My dad was still alive and agile but immediately the issue happened and I could no longer walk, my father excluded himself from the picture, leaving my mum to face the challenges alone. And that’s why I only talk about my mum.

What was your aspiration as a child?

My aspiration has always been to be a very influential person. I think that is just my aspiration. Whatever I am, be it a lawyer or businessman, I want to be influential.

What were the major challenges you faced while growing up in your condition?

There were lots of challenges, particularly being from the North. Statistically, the North has the highest number of persons with disability in Nigeria. This has been associated with ignorance about the importance of immunisation against polio.

Growing up in the North was really difficult because most parents did not want their kids to associate with me; they felt that if they came close to me, they too would have the condition. Even in church, I would notice people not wanting to come close to me. It was a tough time, to the point that I contemplated suicide because I felt life was not just worth it; I felt so useless. I would sit down and cry, asking: “Why is this happening to me?” But in all of that, my mum and siblings stood by me. Unfortunately, I lost my mum when I was eight years old. It was a rough period. I still miss her. Though I was young at the time she died, I still have beautiful memories with her. Every November 16 is always emotional for me.

Do you want to talk about your suicide attempts?

On my first suicide attempt, I drank kerosene because I was tired of life. But my family saved my life by rushing me to the hospital for treatment.

Before going to the university, I first obtained OND in Mass Communication at the Abubakar Tatari Ali Polytechnic, Bauchi State. My days at the polytechnic were traumatic as nobody wanted to associate with me. I could remember being assigned a seat and every other person on the seat left for me. You can imagine that level of discrimination. But something happened one day that changed the story. It was during a class on Introduction to Journalism. After the class, the lecturer asked if there was anyone who could summarise the lecture of the day. We were almost 400 students in the class but no one volunteered. I raised up my hand and summarised the lecture. When I was done, the lecturer faced the class and said, “All of you are disabled except this guy.” From that day, I began to have lots of friends; everybody started to warm up to me. That incident showed that there is ability beyond disability.

But then, there was another lecturer who often told me that I was wasting my time, questioning why I chose Mass Communication. He said he didn’t see how I could be a journalist because I wouldn’t be able to do field reporting. The lecturer forgot that in journalism there are different departments. In spite of my condition, I was determined to succeed. I was active in the Students’ Union Government and I won a lot of student awards.

Was it always your dream to study Mass Communication?

Actually, while growing up, my dream was to become a lawyer. I sought admission into the Ahmadu Bello University but I didn’t make. I tried University of Jos, it was the same story.

I realised that Mass Communication, for instance, would help me to create public awareness. To the glory of God, after my OND, I had the opportunity to host a programme at the Bauchi Radio Corporation for a period of six months. I used the opportunity to advocate the rights of people with disabilities.

Later on, I switched from Mass Communication to Performing Arts and Film Study.

How were you about to fund your education since your both parents had died?

It was not easy for me to pay my school fees. What I did was to solicit funds on the social media, which I used to pay my fees and take care of my other needs.

How were you able to raise money on the social media?

On getting admission, I posted my admission letter on the social media and wrote about my passion for education and why I needed people to support me. I also wrote things I would do after school. People were inspired and made donations to me. I was able to raise over N800,000, which I used to pay tuition fees, got accommodation, paid transportation fares and met my other needs.

Also, remember I told earlier that I was running a radio programme after my OND. On the show, I was advocating for people with disabilities. But the Governor of Bauchi State stopped the programme, saying I was making the government look irresponsible. To frustrate the programme, I was asked to pay N250,000 every weekend for airtime. So, I just had to stop the programme. But unknown to me, there was someone from Ogun State who was based in the UK, who was following that programme. This person reached out to me and told me she had a home for people with disabilities. She asked me if I could manage the home but I realised the pay was N20, 000 plus accommodation. I took the offer as I had no other option at the time. I came down from the North to Ogun State. From the N20,000 that I was being paid, I was still giving other people with disabilities financial help. Each time I gave someone financial help, I would make a social media post about it. I was not doing that to show off but to enable me to get support so I would be able to help more people. When it was time for me to go to school, people rallied round me because of what I had also done for others, which people saw on the social media. I have enjoyed lots of support from my social media contacts and I am grateful to them. In fact, to date, I still get credit alerts on my phone without even knowing who the senders are. I just want to say thank you to social media.

Did you fail any course in school?

Not at all but there were courses that I felt I could have performed better if I didn’t have to worry about certain basic things.

What do you do currently?

Currently, I do not have a job and I am just at home. But I have a lot of plans and dreams, which I want to pursue. With the help of God, I want to create a job for myself because as a person with disability the best you can do is to create your own job. In many workplaces, there are barriers against people with disabilities.

Are you still into advocacy for people with disabilities?

Yes, I am still into advocacy. Presently, I am trusting God that by the end of this month, I will launch a project called Project Ramp Naija. If you go to banks, there are no ramps and people with disabilities can’t access banking halls and other public places. So, Project Ramp Naija will be creating awareness for the inclusion of persons with disabilities in the design and building of public utilities.

Are you in a relationship?

(Laughs) This is very private to me; I can’t really say yes or no.

What are the most important life lessons you’ve learnt?

One of the life lessons I have learnt is that we must be good in everything we do. We should also work towards creating good reputation for ourselves. Also, we must cultivate the habit of helping and supporting others.

What advice do you have for people with disabilities?

My advice is that they should not let their disabilities stop them from pursuing their dreams. They must accept themselves and invest their time and energy in things they are passionate about. If they do this, I can assure them, millions of people around the world are waiting to invest in their dreams.