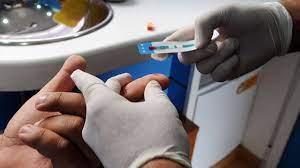 A 9-year-old South African boy diagnosed with HIV when he was one month old has been in HIV remission for 8½ years — without regular treatment.

This is the first reported case of a child controlling their HIV infection without drugs in Africa and the third known case globally.

Soon after diagnosis, the child was placed on antiretroviral treatment, or ART, for 40 weeks, at which point treatment was stopped and the child’s health was monitored.

Blood tests in late 2015 revealed the child is in HIV remission, meaning levels of the virus in the blood are undetectable using standard tests. Subsequent testing of samples dating back to the child’s infancy confirm remission was achieved soon after treatment was stopped.

Treatment was paused as part of a larger research trial investigating the potential for early ART to decrease infant mortality and reduce the need for lifelong treatment among newborns infected with HIV.

“This is really very rare,” said Dr. Avy Violari, head of peediatric clinical trials at the Perinatal HIV Research Unit at the University of Witwatersrand in South Africa. Violari is the child’s doctor and presented the findings at the 9th International AIDS conference on HIV Science in Paris on Monday.

“By studying these cases, we hope we will understand how one can stop (treatment),” Violari told CNN.

There is no cure or vaccine against HIV, and lifelong treatment for children comes with the risk of potential toxicity, side effects and the need for daily adherence, which becomes harder during the teen years.

The child, who was not identified, was part of a study known as the Children with HIV Early Antiretroviral Therapy, or CHER, trial, which ran from 2005 to 2011. More than 370 infants infected with HIV were randomly assigned to immediately receive ART for either 40 weeks or 96 weeks. A third group were not placed on immediate treatment, but instead received treatment according to standard guidelines at the time.

When the trial began, standard treatment was based on the level of immune cells damaged by the virus, known as CD4 cells, within the body. Current guidelines recommend immediate treatment, irrespective of CD4 cell count.

In infants infected with HIV close to birth, progression of the disease occurs very rapidly within the first few months of life and can often lead to death, according to the World Health Organization. An estimated 110,000 children died of AIDS-related illnesses in 2015, according to UNAIDS.

Pediatricians also worry about the side-effects and health impacts of lifelong treatment with antiretroviral drugs for those who survive.

More than 1.8 million children were living with HIV in 2015, according to UNAIDS, and 150,000 children became newly infected, the majority of which were in Africa.

The CHER trial set out to investigate whether mortality rates could be reduced, but also whether earlier treatment could keep children healthy enough to enable them to come off treatment for certain periods.

“We were hoping to make it a slower-progressing disease,” said Violari.

The study found mortality decreased by 76% and HIV disease progression reduced by 75% among the infants who received treatment immediately, for 40 or 96 weeks. The group receiving standard treatment saw an increase in mortality based on interim results, so that arm of the trial was stopped early.

Children receiving early treatment in the trial needed to go back onto it, on average, after two years, Violari said, with cases ranging from needing it immediately to needing it after four years. An estimated 10 children have not had to go back on treatment, she said, as their viral loads are fairly low — between 1,000 to 3,000 per milliliter of blood — meaning they are healthy, in clinical terms.

But virus levels in the 9-year-old case are undetectable. “The child is the only child showing remission,” said Violari.

“We cannot see virus in the blood using standard techniques … we can see fragments of the virus in the cells,” she said, adding that these fragments appear not to be able to replicate, for now, giving hope the child may stay this way. “This child is unique.”

The South African child is the third reported case of long-term HIV remission in a child after early, limited treatment with antiretroviral drugs.

The first case was a Mississippi baby, a girl born in 2010, who received ART just 30 hours after birth until she was 18 months old, at which point HIV remission was achieved. The baby sustained remission for 27 months, until 2015, when she rebounded and the virus was found in her blood, crushing hopes that this approach could be the route to a “functional cure” for HIV.

Next came the 2015 case of a French teenager, now 20, whose mother was HIV positive. The French child was given antiretroviral treatment soon after birth, stopped treatment at age 6 and has maintained undetectable levels of the virus in her blood since.

Asier Saez Cirion from the Institut Pasteur in France, who presented the findings on the teenager in 2015, confirmed to CNN this week that the teen is still in remission and maintaining good health, meaning she has been controlling her virus for more than 13 years.

Now comes the case of the 9-year-old boy in South Africa, in remission for more than eight years, but after just 40 weeks of treatment. Violari stressed, however, these cases are extremely rare and that people infected with HIV should by no means come off their treatment.

“Not everyone can achieve remission,” she said.

Three adults have also been reported to achieve remission to date, known as the Boston patients and Berlin patient, but all received bone marrow transplants for this result, not early treatment with antiretroviral drugs. The two Boston patients rebounded, leaving Timothy Ray Brown, the Berlin patient, as the only person to be clinically cured of HIV.

“The real question will be what percentage of babies treated early will achieve this result? We don’t know,” he said.

Fauci believes this kind of outcome only becomes important if you have a considerable proportion of babies protected, making it applicable as a potential therapy approach.

“You always get an outlier,” he said. In this case, the outlier being the 9-year old. “Further study is needed to learn how to induce long-term HIV remission in infected babies,” Fauci said.

Violari agrees that this new remission case is not applicable to all infants with HIV, but instead that something unique about his biology and immune system helped him protect himself from the virus, aided by starting treatment early.

He developed an effective immune response to the virus early on, she said, and treatment then protected the child. “I think the early treatment aided it,” she said.

Her team now hopes to investigate the child, and others from the original CHER trial along with HIV-negative children to try to elucidate just what is unique about the biology enabling a child who has been treated to then suppress the virus indefinitely — and independently — known as a post-treatment controller.

“We need to see where the differences lie,” she said, adding that this insight could be used to inform vaccine design or new treatment approaches, such as the use of neutralizing antibodies to help people suppress the virus.

We could develop a product given to people in combination with ART so people can eventually stop ART, said Violari. This would not be because they are cured, but because virus levels are low enough, or undetectable, to help them stay healthy without the need for drugs.

“It’s a long shot,” Violari said. “But we can look at what’s different.”

Fauci agreed that extensive evaluation of immune regions of these cases could help scientists find something special to guide inducing this in others. “That’s being intensively studied now,” said Fauci. “We have the outcome, we just need to get there.”