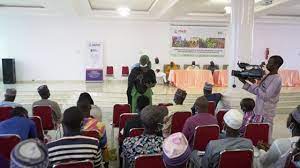 The USAID Northeast Connection through the direct implementation activity under Borno state portfolio, has handed over modern farming tools to 120 vulnerable youths in Borno state.

The event was organized to mark the end of intensive training and support for 120 vulnerable youths to help boost their resilience against violent extremist infiltration through agricultural livelihood and promote peace building in two wards of Galdimare and Yawi in Biu local government area of Borno state.

During his opening remark, the USAID Northeast Connection Program Manager, Borno, Mustapha Shettima said the overall goal of NE Connection Activity is to strengthen resilience of communities vulnerable to violent extremist infiltration and conflict and to develop local capacity to respond to emerging threats.

He said,”The USAID Northeast Connection through the direct implementation activity under Borno state portfolio, organized a one-day event on official handing over and distribution of modern farming tools to 120 vulnerable youths trained in modern technics on irrigation farming.

“By targeting communities not yet under the control of violent extremist organizations (VEOs) across target states of Borno Adamawa and Yobe.

Mr. Mustapha Shettima reckoned that one of the root causes of youth joining violent extremism is the lack of economic opportunities and livelihood.

He said the program has been delivering other interventions through local and international partners on periodic research, outreach campaign against violent extremists’ misinformation, support existing and new early warning response platform, capacity building for women groups and female leader, engaging IDPs and cultural minorities in intercommunity exchanges among many other activities streams of USAID NE Connection across Biu, Jere, Hawul, Kwaya Kusar and Shani LGAs of Borno.

He finally extends the highest regards of the NE Connection Program and that of its leader and Chief of Party, Mr. Albert Pam.

“In the month of August 17 – 23, 2022, the NE Connection has trained 120 youths on modern technics in irrigation farming and peace building to enhance their resilience and prevent conflict.

“The training was aimed at exposing them to modern technics in irrigation farming and to strengthen their resilience against violent extremists’ recruitment drive.

“After the distribution exercise, each beneficiary is expected to put into good use the agricultural livelihood (farming tools) provided to them by USAID NE Connection program.

“The agricultural equipment given to the 120 beneficiaries include a set of water pump machine and hosepipe, rain boot, cutlass, rake, and hoe,” he said.

Many beneficiaries expressed their delight at the opportunity given to them by USAID NE Connection through this intervention and the community stakeholders promised to follow-up and make sure that it put into good use.