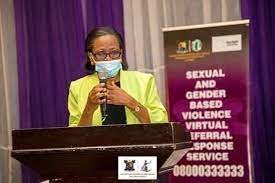 Speakers at the Sexual and Gender-Based Violence Symposium on Tuesday called for the reform of the protection laws as it related to the survivors.

The symposium, with the theme: ”Tales of Survivors”, was organised to commemorate the Lagos State Domestic and Sexual Violence Awareness Month.

Giving his Goodwill message, the Chief Justice of Lagos State, Justice Kazeem Alogba, said that there was the need to protect the victims/survivors of sexual and gender-based violence, so they could easily seek redress.

Alogba, who was represented by Justice Sherifat Solebo of the High Court, Lagos said that stigmatisation had discouraged a lot of victims from speaking out, making perpetrators to continue in the act.

”For those who are strong enough to come up and try to relate to us their experiences in order to encourage other survivors to come out and report offences, I don’t think we should discourage them.

”It affects their trust in the system, it enhances stigmatisation, and of course, it represses this issue of coming forward to report.

”That is why we think the issue of protection law should be enhanced and improved upon with clarity as to protection of the identity, the name, the face, the address, the parentage, anything that could lead to identifying these victims,” he said.

Alogba said there should be reform of the sentencing guidelines of Lagos State to suit peculiar circumstances.

According to him, sentencing is not just to reflect the practicality of analogical sanctions, but should be reflective of the particular circumstance of each case, as it should not be generalised.

Speaking on ”Expose on Sexual and Gender-Based Violence”, Prof. Olufunmilayo Bammeke, the Dean, Faculty of Social Sciences, University of Lagos said it was important to have a multi-sectoral approach to the responses to survivors.

Bammeke said that sexual and Gender-Based violence survivor were very reluctant to seek redress for fear of being blamed, of being disbelieved and of being stigmatised.

She commended the courage of survivors who were able to go forward to seek redress and that such survivors must have a lot of support.

”It is not easy for a survivor who does not have support to go out to seek redress, because rather than support an individual, if the person is discouraged, that person already has a challenge of speaking about what he or she experienced.

”Then they also have a distrust for formal institutions. We find people being very cynical, some of the survivors say nothing will come out of the redress being sought,” the professor said.

Mrs Titilola Vivour-Adeniyi, the Executive Secretary, Lagos State Domestic and Sexual Violence Agency (DSVA), said the agency was ensuring it contributed to the responses of sexual and gender-vased violence, both preventive and remedial.

Vivour-Adeniyi said that in the past one year, DSVA had provided services to over 4,800 adults and children, who were survivors of domestic and sexual violence.

She said that survivors often faced various multi-facetted challenges, which might have long-lasting impact on their physical, mental and psychological state of mind.

”It is also our hope that this symposium will inform new polices, which are critical to adequately and proactively prevent and where necessary, respond to sexual and gender-based violence in Lagos State,” the executive secretary and.

During the symposium, some survivors shared their stories, how they took a stand against domestic and sexual violence and how they had been able to show resilience in the face of the challenges that followed.

By telling their stories, the survivors served as motivation to others, letting them know that it is possible to overcome both the trauma of domestic and sexual violence, and to demonstrate that indeed, there is life after violence.