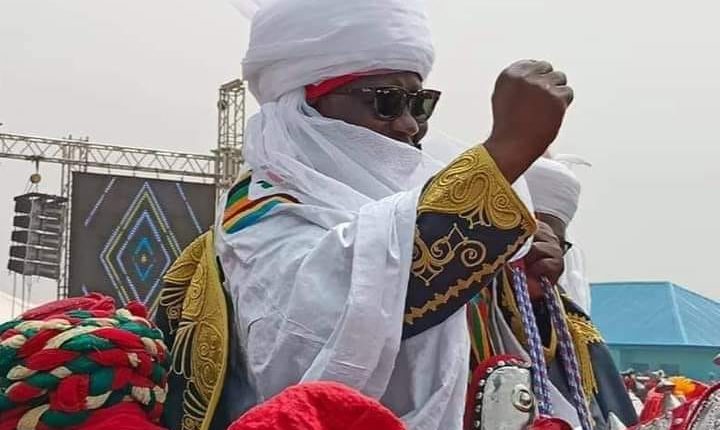 Nasarawa State Governor, Engineer Abdullahi Sule, has extolled the leadership qualities of his immediate predecessor, Senator Umaru Tanko Al-makura, who he said, has continued to break frontiers even after leaving office.

Engineer Sule laid the commendation shortly after Senator Al-makura was turbaned the Sardaunan Gwandara worldwide, at an elaborate ceremony which took place in Kwandere, on Saturday.

Highlighting the uncommon leadership qualities of the former governor, who now represents Nasarawa South at the upper chamber of the national assembly, the Governor said, unlike what obtains in the political terrain, where once a politician leaves office he is abandoned, Senator Al-makura however continues to break new frontiers.

According to Engineer Sule, he as a person, exemplifies the selflessness and patriotism of Senator Al-makura, whose commitment to justice, fairness and unity of purpose, led the former governor to pick him as his successor.

“I wasn’t a member of the Congress for Progressive Change (CPC), I wasn’t his commissioner or Adviser. I was even appointed by the late Alhaji Aliyu Akwe Doma, as Chairman of the state investment company and when he came, he removed me,” he stated.

The Governor noted however that when it was time for Senator Al-makura to do the right thing for the development of the state, he selected him to become his successor.

Engineer Sule said, because of this, he has a personal commitment to continue and build on the foundation laid by the former governor.

“I’m committed to building upon and exceeding the foundations laid by Senator Al-makura, not because I’m better than him, but to justify his trust in my capacity,” he stated.

The Governor used the opportunity to launch two books written on Senator Al-makura, personally buying over 800 copies of the books for distribution to all members of the national assembly, institutions of higher learning across the state, among others.

As part of the coronation ceremony, Engineer Sule was also turbaned as the Turakin Gwandara of Kwandere, by the Sangarin Kwandere, HRH Alhaji Ahmadu Al-makura.

Earlier, Chairman of the event and first civilian governor of the state, Senator Abdullahi Adamu, urged the new Sardaunan Gwandara, to emulate the leadership qualities of the first Sardauna, Sir Ahmadu Bello, known for his distrabilized nature and for uniting the North, irrespective of tribe or religion.

In his speech shortly after his coronation, Senator Al-makura, promised to emulate the leadership style of the late Sardaunan Sokoto and Premier of the Northern region, by accommodating everybody, irrespective of tribe or religion.

“I am happy to receive this recognition because I will want to be like the Sardauna of Sokoto, the late Sir Ahmadu Bello. This country needs many Sardauna of Sokoto to ensure peace, unity, stability and security,” he stated.

The occasion was graced by prominent dignitaries from within and outside the state, including the state Deputy Governor, Dr. Emmanuel Akabe, Minister of Information, Culture and Tourism, Alhaji Lai Mohammed, the Emir of Kano, HRH Aminu Ado Bayero, who was represented by the Sarkin Dawaki Mai Tuta of Kano, Alhaji Aminu Babba Dan Agundi, the Emir of Lafia, HRH Justice Sidi Bage (rtd), among others.

Center For Children With Neuro-Development Challenges Opens In Edo