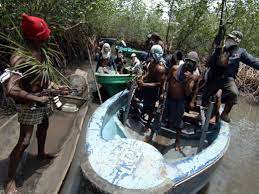 The Federal Government, yesterday, blamed those it described as economic saboteurs for the vandalisation of crude oil facilities in Niger Delta region.

He said the government was looking into the issue with a view to fish out and sanction those who were sabotaging the economy, degrading the environment and unleashing untold hardship on the people ofNiger Delta.

Musa, who spoke when two civil society groups, Connected Development, CODE, and Oxfam Nigeria, paid him an advocacy visit, said: “An oil spill happened a few weeks back and we constituted a joint investigation visit to the place.

“The report indicated that it was as a result of sabotage and this is something we have been advocating that we should put an end to, as it’s leading to  destruction of oil facilities because when this thing happens, as a nation, we lose revenue, people lose sources of livelihood because the oil will be packed on areas where they fish or farm and then it will be a loss to the oil company that owns it and also a loss to the environment.

“The environment there is very fragile and the ecosystem is also fragile, so, it takes more than ordinary measures to do a clean up of such places.

“The best thing to do there is to avoid any sort of oil spills, and when spill comes as a result of equipment failure, it requires proper sanctioning, proper cleaning up and repudiation.

In the same vein, Director-General, National Environmental Standards and Regulations Enforcement Agency, NESREA, Mr. Aliyu Jauro, stated that inequality and poverty were major factors driving the problem of environmental pollution in the country.

He, however, assured that the government was ready to partner the civil society to ensure that the adequate protection of the environment.

Earlier, the Chief Executive, CODE, Mr. Hamza Lawal, harped on the need for a sustainable partnership between the government and the civil society to address the situation.