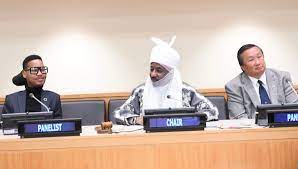 Edward Ndopu, an internationally acclaimed activist, and UN Sustainable Development Goal (SDGs) Advocate, has called on the world leaders to support People with Disabilities (PWDs) to get quality education.

Ndopu, a South  African disability rights advocate, who spoke as a panelist at a session on “Transforming Education through Grassroots Innovation: A Localised Teacher-Led Approach,’’ said nobody should be left behind in achieving the SDG4 targeting equitable quality education.

The session was organised on the margins of the 3-day Transforming Education Summit at the ongoing UN General Assembly in New York.

Former Central Bank of Nigeria (CBN) Governor Lamido Sanusi and the 14th Emir of Kano, who is also an advocate of SDGs, chaired the session.

Ndopu told the participants that he is a living testimony of what is possible when investment is made in quality education.

“At the age of two, I was diagnosed with spinal muscular atrophy, a degenerative condition that affects the muscles and results in progressive weakness.

“In other words, the older I get, the weaker I become, and my doctors gave my family a prognosis that I wouldn’t live beyond the age of five. I have outlived myself by 25 years and counting.

“I am the first African graduate with disability from Oxford University, so I have a motor and it is that disability and possibility belong to the same space,’’ he said.

Similarly, Sanusi advocated for deliberate policy to include the marginalized, especially PWD in education and employments.

He said: “Sometimes we don’t get it because we don’t realise the implications of policy on specific individuals.

“I will give an example. When I was governor of Central Bank, I told the director of Human Resources that we need to go out and employ disabled people.

“And I insisted that we must go out and look for someone who is visually impaired, and who can work there and there must be a role in the Central Bank for that person.

“So, we went and recruited one or two. And then the Director of Human Resources came to my office after recruitment, and then she was all in tears crying.

“And for her, just to have the governor of Central Bank saying he wants to bring in blind people was really a personal, emotional one.’’

Sanusi said you could imagine what the person in that was affected would feel if somebody who’s was just a daughter was emotional about it.

He said that the more we really begin to think of the impact we make on the lives of these human beings (PWDs) then there has to be a policy that is deliberate.

The former Emir said we were often insensitive to people and somehow, we just think what works for us works for everyone.

“When I became governor Central Bank, the branches all had these security doors, when you go in and they closed and walk in, we all know that they do not accommodate wheelchairs.

“We actually had to issue a regulation, requiring every bank in every city to have at least one branch that was wheelchair friendly.

“Because you’re excluding  everybody on a wheelchair because you can’t go to the bank without thinking of the security door that your wheelchair cannot go through, that was financial exclusion.

“So, the point we are making is that beyond what we do, we have to engage at the level of policy, it is really our politicians.,’’ he said. (NAN)