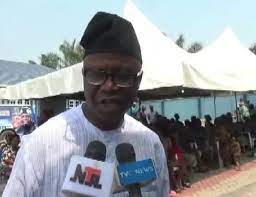 No fewer than 500 widows, aged and People with disabilities benefitted from the Mega Empowerment floated by a strong promoter of Asiwaju Bola Ahmed Tinubu’s Presidency, Chief Segun Ajibulu.

Ajibulu, chieftain  of the All Progressives Congress(APC) and coordinator of the Tinubu Support Groups in Ekiti said he decided to expand the scope of the programme as part of his support for the Presidential ambition of  Tinubu .

He expressed optimism that life would be better under Tinubu’s Presidency urging Nigerians to elect Tinubu come February 2023.

Food items, ingredients as well as cash gifts were distributed to the  beneficiaries on the targeted communities from six communities

Ajibulu, former Senatorial aspirant in Ekiti North attributed  the current hardship occasioned by hike in fuel prices  and difficulties in clearing goods at the Lagos Port, to deliberate plot by some unpatriotic  persons to paint the APC led government bad in the eyes of the public .

He therefore charged both the presidency and the APC leadership to identify these bad eggs and show them the way out of the system before they cause further harm.

The APC stalwart, who urged the government to probe the immediate and remote cause of  recent fuel crisis also lamented that the menace  had inflicted  severe pains on Nigerians .

Ajibulu ,President of the SouthWest Professionals said ” as a party in government, the APC must not take issue of economic sabotage with levity.There  are clear indications that some people are out for mischief. I think some individuals had outlived their usefulness in Buhsri’s administration.

“This would amount to insensitivity on the part of government, if it failed to investigate the cause of this needless fuel crisis. I think it is high time President  Muhammadu Buhari sanctioned some evil-minded individuals within the system who were bent on bringing his government down. I cannot imagine how some government officials should still be sitting comfortably  as their duty posts with all these economic mess .

“We have a number of PDP elements who served during the administration of Goodluck Jonathan who were still retained by Buhari.Mr President should know that these people will never wish him well .

” I am told that nobody is allowed to clear any goods at the ports as at now. The officials are giving flimsy excuses that the network was poor .How can we be having thus kind of situation under the current hardship. I hope somebody is listening to me on this.

“If their target is Asiwaju’s Presidency, I think they are getting is wrong .Nigerians believe in Tinubu and they know quite well that he  has the capacity and capability to deliver, but we must not be complacent and allow these economic saboteurs to  have free day. By special grace of God,Tinubu is winning this election and all available indices are in his favour.

Speaking on the planned Walk for Tinubu, the APC chieftain said arrangements were in top gear to make it happen in a big way in  Ekiti .

He expressed joy that a number of  formal and informal bodies have endorsed Tinubu’s political aspiration .

” We have held meetings with over 300 pro-Tinubu groups in Ekiti and our focus is to know their areas of strength. We are leaving no stone unturned in delivering Ekiti for Tinubu.Our target is to have atleast i80percent of the total vote cast in 2023  Presidential  poll and it is possible. Support for Tinubu had gone  beyond APC ,it is indeed across party lines. We have gotten commitment from many opposition groups on Tinubu’s project ” Ajibulu declared.

Appreciating the donor ,the Olu Itapaji, Oba AbdulKareem AbdulAzeez said the empowerment could not have  come at a better time than now when Nigerians are going through economic hardship.

Oba AbdulAzeez  noted that the gesture had brought smiles into tbe faces of the beneficiaries of the annual largesse.

” Let’s appreciate Chief Ajibulu on half of the beneficiaries many dont have anything to celebrate Christmas and New Year but this honest intervention had brought succour to many homes. I can only pray that God Almighty will continue to bless and enrich his pocket ” the monarch said .